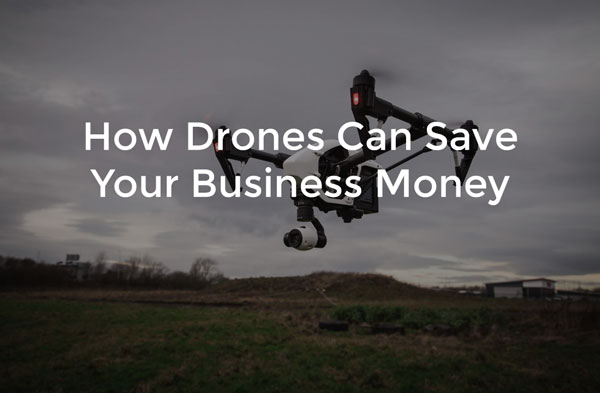 Drone technology is well on its way to disrupting multiple industries, or at least that’s what everyone is saying. But what can drones do for your bottom line? You may have been running your business for years, or you may of have just started, but either way you know that at the end of the day a company depends on revenue to stay afloat. With all the tech articles and start-up bros salivating at the mere mention of quadra-hexa-octo-(insert number prefix here)-copters, they seem interesting. Yet, you’re still not convinced they can help you and your business where it counts. Well before you make your decision on drones, here are some ways that Unmanned Aerial Vehicles & Systems (UAV/UAS) can start saving money for your business.

Employees are the backbone of a company, and a motivated well-trained team is crucial for the growth of your company. Yet your best people still have to spend a lot of time gathering and parsing through data to use their knowledge to make the right decisions. That means less time on execution, and more time on data gathering. With drones you can cut down that data gathering time immensely. Drones can not only augment human labour, they can replace it. With self-guided flight paths, data analytics, and precision cameras, a drone can cut down a 12-acre survey job that takes 100 hours to manually survey, to about 2 hours. That’s a huge decrease in cost as salaried workers spend less time, and thus less per-hour-cost, on site. Let’s do some simple math.

Average EU Salary: 3000 Euro a month (for this estimate per every 4 weeks)

That means 100 hours spent at the site gathering data would cost 1875 Euros per person at the site (which is usually a crew of at least 2). With a drone operator, with average service rates between 100-300 euros per hour (depending on job requirements) the project could theoretically be done for less than 1000 Euro. That’s not only a significant cost cut, but time cut, meaning you can focus on more pressing issues faster.

When it comes to film and video, cranes, jibs, and helicopters have been the hallmarks of aerial shots and footage for decades. However a lot of these methods and equipment can be costly and need large amounts of capital. Now, with the advances in batteries, materials, and cameras, drones can be operated for far less money than traditional methods. That means that drone services can give you the same quality aerial photography or video service for a fraction of the cost of a helicopter, a crane, or satellite imagery.

Can’t hire or train full-time drone pilots? The ease of access of with drone services platforms like Dronesperhour.com means that even if the project needs are infrequent, or specialized, you don’t need to put up the costs to buy your own equipment and hire your own pilots. These services can be hired by freelance operators that already understand the regulatory territory of your region, and will act accordingly.

Again, one of the most costly aspects to any decision making process is gathering data. It’s not just an issue of time, but also precision information is hard to come by without systems that can measure metrics. And if you’re metrics are hundreds of acres of farmland, a quarry mine, construction site, or even just your backyard, drones can help. Still, research is a meticulous process which requires detail. Fortunately drone technology provides both quantitative and qualitative data all at once with the use of both software and those who are experts in the situations. This makes it easier to be able to both log, record, and use your observations quickly and cost effectively.

When new technology like drones are in their infancy, it can be hard to see where they can directly help you sometimes. Yet, their potential is quickly becoming reality as improvements to systems and models become more sophisticated, precise, and most importantly cheaper. Next week we’ll cover the closely related topic of drones and work efficiency. Stay tuned, and keep your eyes on the skies!

If your interested to understand how exactly your business can cut down costs, schedule a free consultation with us at contact@dronesperhour.com or call us at +49 177 5612142.